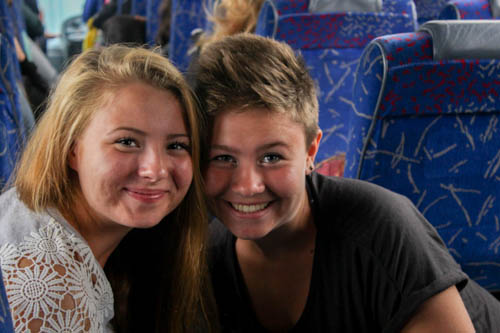 Me and Chabu when we met, this one’s from a busride between Brighton and London last summer.

I’m getting bored with school. There’s no challenge. So I spent English and Swedish sending out e-mails to all kinds of companies about possible student discounts with the FSS student card. I even called a few. Then finally, Chabu came down to Arabianranta, and we had such a great time in a cafe! We haven’t seen each other in more than a month, so believe me there was a lot of things to catch up on.

But then, just when I was going to get on the bus home to have dinner with my family (only night this week when I’m gonna be able to that) my Mom texted me saying that they had already eaten. So I thought I had the night of and well, a good chance to hang out with some friends. But before either of the ones I texted had anwered, I saw the Porvoo-bus coming and decided to go home since it was the line that goes almost to my house. And then as soon as I stopped it, I realised that it was the other line and that I would have to walk home. And on top of that, the bus was more than full with a lot of loud people and so I just fell asleep sitting with some random stranger.