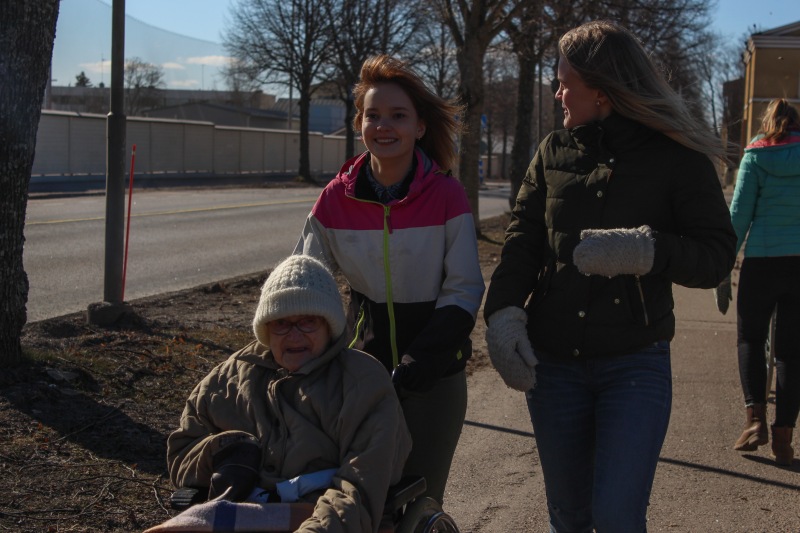 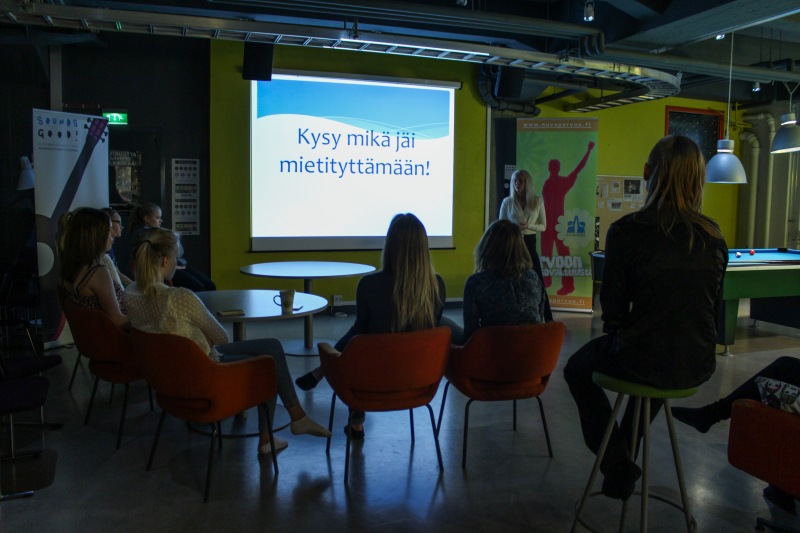 Since last time. I’ve been to a really interesting lecture about gender studies that had no point. I also attended a workshop about HBTQI-youth, being the only HBTQI-youth in the room. And then I had my very first job interview for a possible summer job at Porvoo city, doing some office work. So now we’re crossing fingers and waiting for them to interview some other people.

Today, the Youth Council had a full education-day. Me and Nea, the oldies in the group, had planned with presentations of our partners, then walking with people from the retirement home and then after some pizzas we continued with som team-building activities. In Porvoo, there’s a so called #WalkingBuddy-challenge, which means that locals take people from retirement homes out for a walk. The mayor challenged us, so we went to Palomäki service center to be walking buddies before lunch. With a group of 16 young people, we got to the front door and called the doorbell. And waited. And waited.

Then some nurse opened the door. And we got in and didn’t have a clue where we were supposed to go. Another nurse said we could go out with people from the second and third floor. So we split in two and and went to the different floors, where we were told that we could pick up some old people in the entry hall. Two in wheelchairs, one walking. All doors in the building are locked. And that’s the information we got.

So there was this lady waiting in the hallway with her walker. And I went up to her and introduced myself and the group and she looked at me with big eyes and said “Do you want to walk with me?”. And so I say yes. And then we walked. And talked and talked. And she seemed to be fine with the retirement home and the programme and the food and everything.

And so we came back to the home and the nurse who opened the door asked us to help the residents to their rooms and get the coats off. I had been walking the whole time with this lady and she asked me if I was her friend and I said of course I was, and we just went looking for her room. And then she stops me in the middle of the corridoor and says to me, Bicca, I don’t live here. My room is at home.

But I saw a sign on one of the doors with her name on it. So I took her there and told her that they had a room reservated where she could remove her outerwear and hang out before dinner. And so I left this woman in a room that she didn’t recognise, but was hers, and it just broke my heart. Then I helped a friend of mine bring another lady into her room, and this woman just looked at me and asked: “So where do I go now? What happens next?”. And what were we supposed to say? I told her they’ll have dinner later and that we are going back to the youth center. And she looks at me again and wonders if she’s joining us and what is she supposed to do? So I asked her if she wanted to go to the sofa and watch TV with some of the others. And she nods her head in a kind of indifferent way. And then we left her there, in the sofa with the other guys.

Before we left, we went by the nurses office and told them that we left some of the residents in the sofa watching TV. And this nurse replies: “Yeeeeaah they can probably sit there for a while”, and then continues drinking her coffee. WHAT.

The other parts of the day went great though, and we had a good time getting to know each other and having quite a lot of fun. But this incident at the retirement home will stick around in my mind and I just really feel like doing something about it, but I’ve got no idea where to start. Sigh.