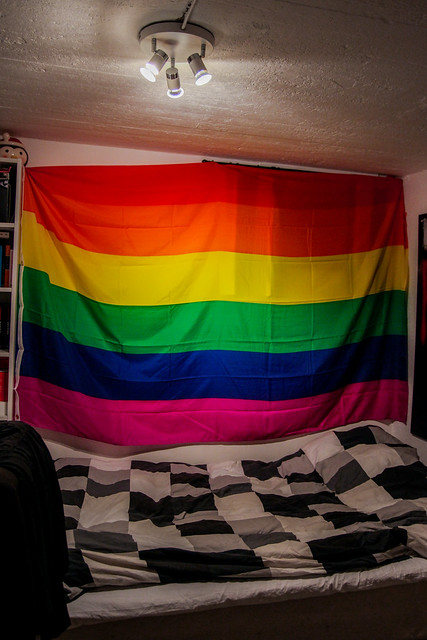 Something I can not recommend: Working 23 hours without eating.

And no, I don’t have an eating disorder, I’m just very stupid. I ate an ice cream and some youghurt at Emil’s place last night 11 p.m.-ish. And then I came home around midnight. And went to bed around 2 a.m. And since I had an evening-shift that I wanted to extend, I got up around 10 and took the bus to Helsinki. In the bus I realised something was missing: my wallet.

Now there are five things I go nowhere without. My phone, my camera, my headphones, my keys and my wallet. I’ve got everything in my wallet. Money, driver’s license, bank card, all other cards, lunch coupons, condoms, tampons, my lucky Australian coin from the beginning of the 20th century that my grandma gave me, at least one extra memory card for the camera and you name it. So without it, I felt pretty lost. Also, that meant I wouldn’t get any food until I got back to Porvoo. Which will be at 10 p.m.

Apart from that. I’m finishing up my big #inyourshoes-project for the newspaper Hufvudstadsbladet this week. The project also works as my vocational exam for the internship I’m doing there. I imitate roles from the street picture and write about how it felt to play those roles. The whole thing will be published in the newspaper on Thursday, so now I’m rushing with the layout, cutting and correction of the texts, the graphical stuff and you know, ordinary me running around doing 30 things.

To be honest. I’ve done more inspiring projects. Everyone at the editorial seems to think that this is the most perfect project ever, and just for ME and the kind of person I am. And it’s so not, but they mean so well so I’m not going to break it to them. I mean it works for me, because I don’t have a problem with playing a mimeartist in the middle of the street. But it’s not like I actually enjoy it THAT much. I did it because I had to do something and this was the first idea that came up and I’m superlazy. Oh well, it’s my last week there anyway.

I’ve loved this internship. I’ve made friends, learned a lot, and gotten safer with working in big working environments. Not a doubt about it.

If you’re a Finnswedish journalist and want to be in the elite, you either work for the national state-owned broadcasting company YLE, or you work for KSF Media, Hufvudstadsbladet being their biggest newspaper.

And now I’ve done internships on both, worked part time at KSF Medias youth editorial for a year and a half, and I have a summerjob at YLE coming up. I’ve loved all of them. But – and this is where it gets crucial – I would NEVER work the rest of my life for either of them.

But as a conclusion, this was a nice experience. I will probably freelance some here in the upcoming years. And right now I’m just looking forward to the summer and the 5 nights I’ve got off. Oh and the traveling.