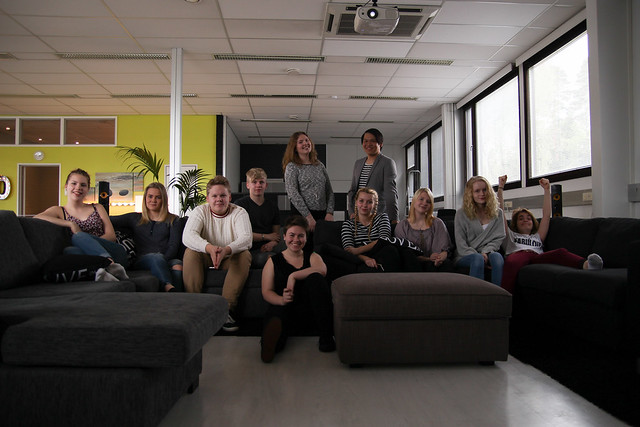 The amazing team behind the evening party on Saturday (pics later!) 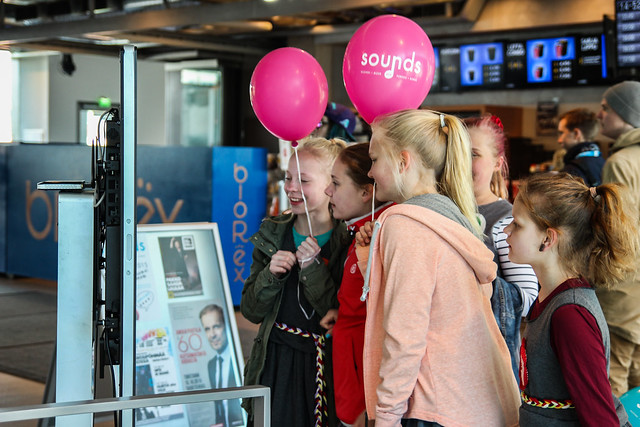 A selfie camera in the lobby! 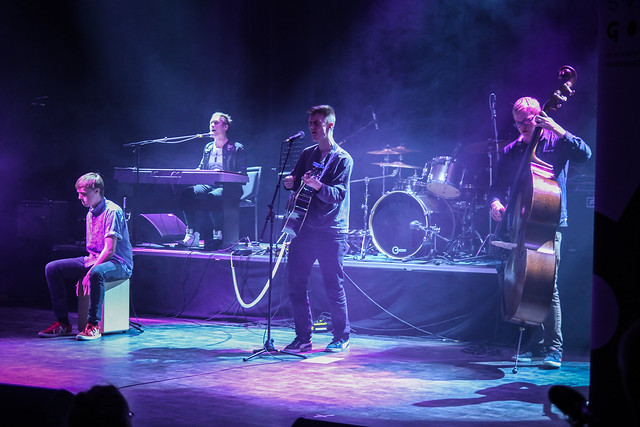 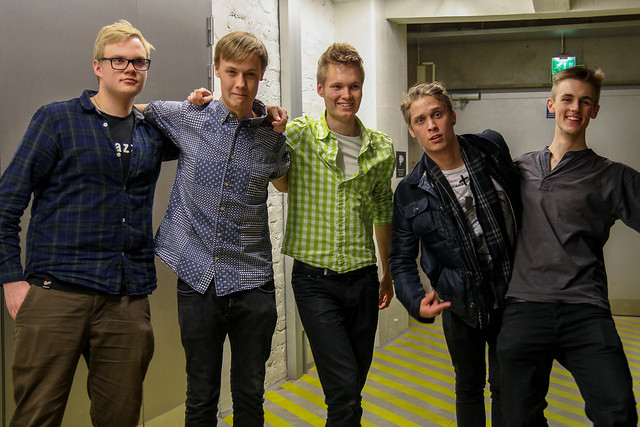 These well-known Porvoo rockstars got to perform with former Finnish Eurovision rock singer Topi from Softengine. 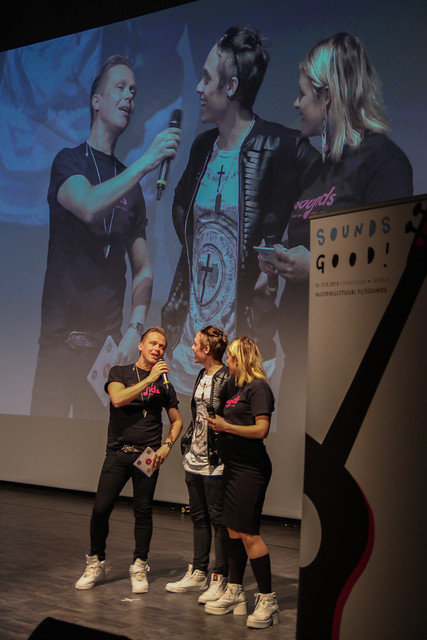 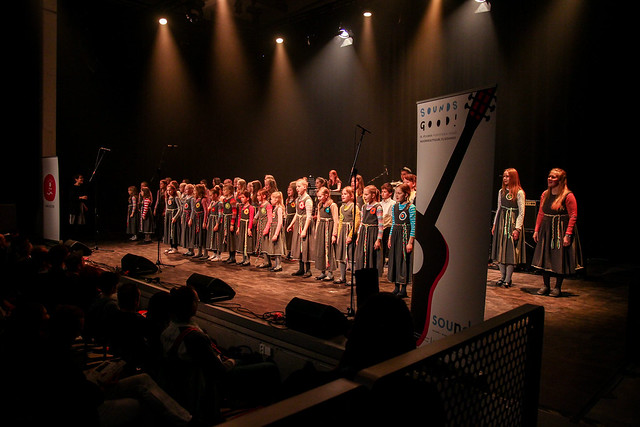 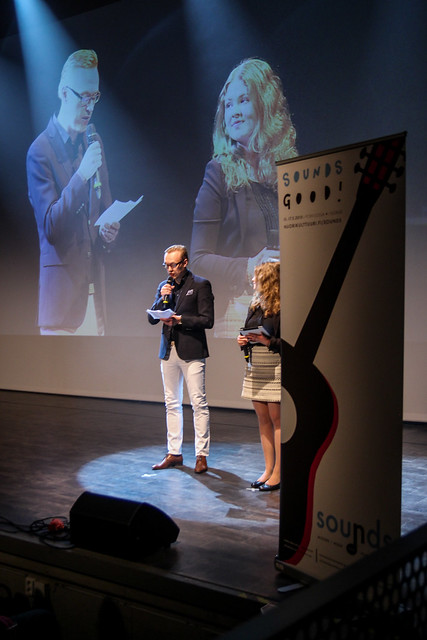 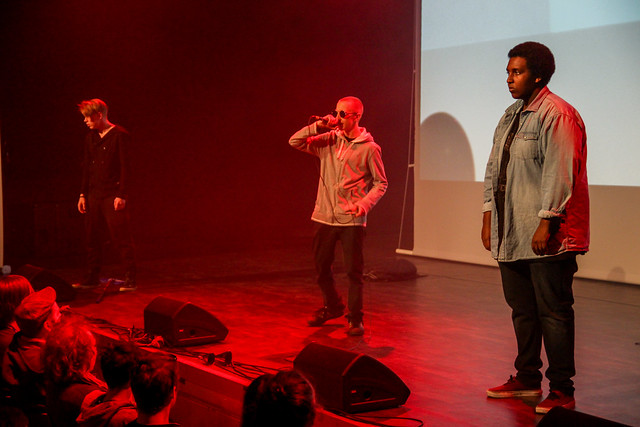 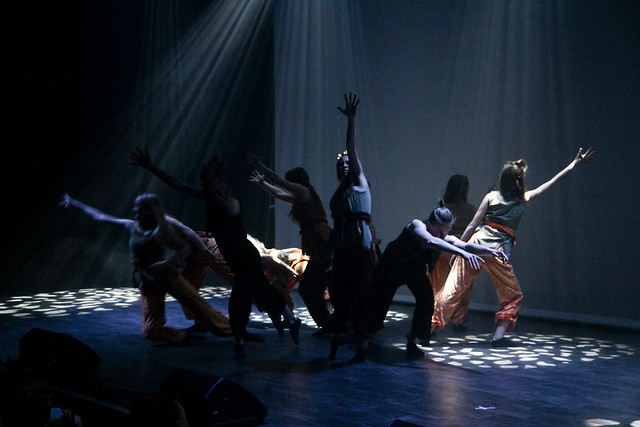 More pictures from the opening. 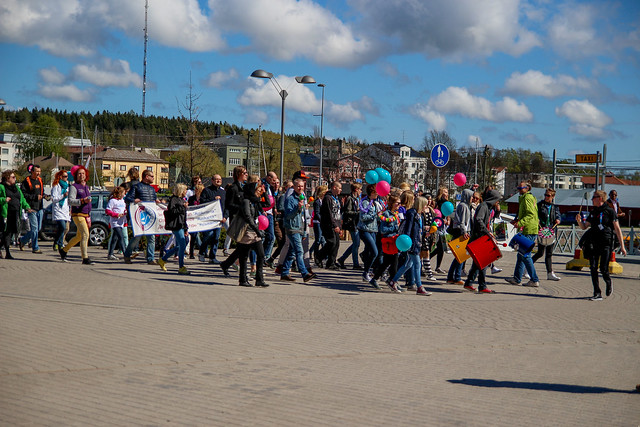 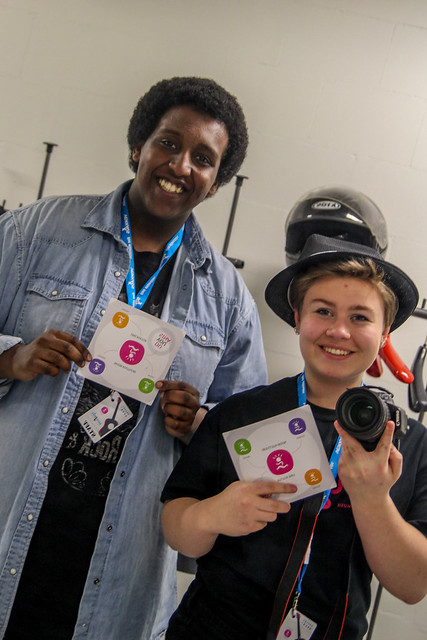 Me and my host-colleague Hassan Maikal. 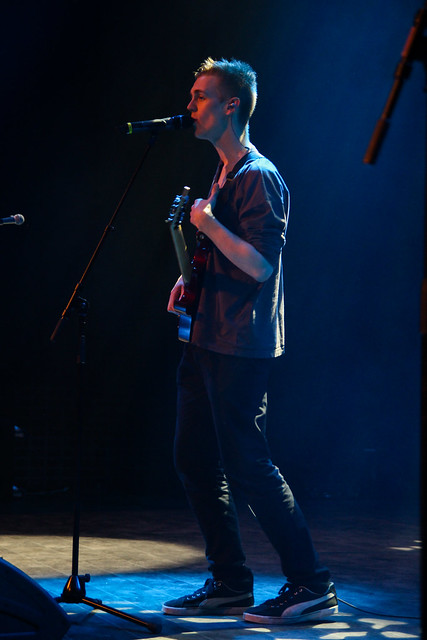 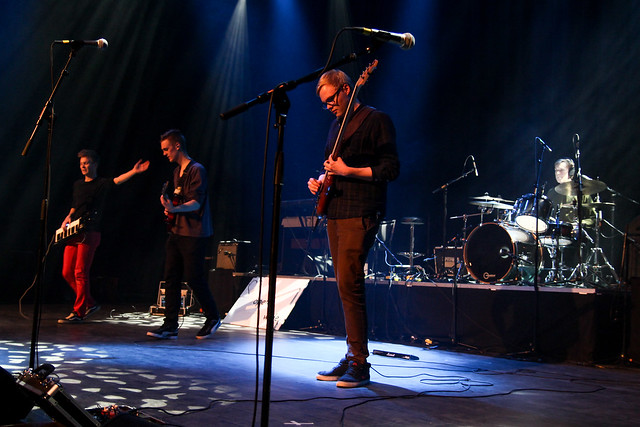 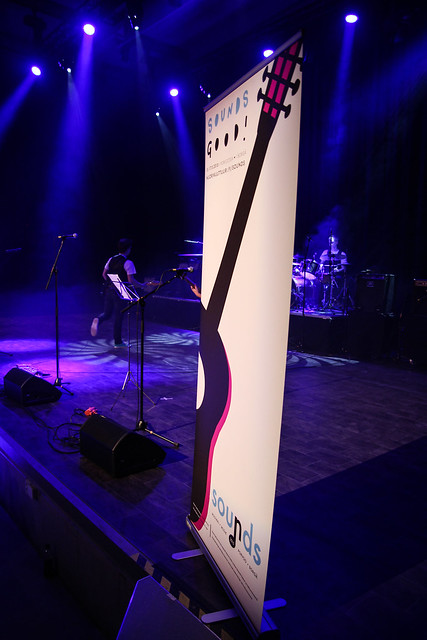 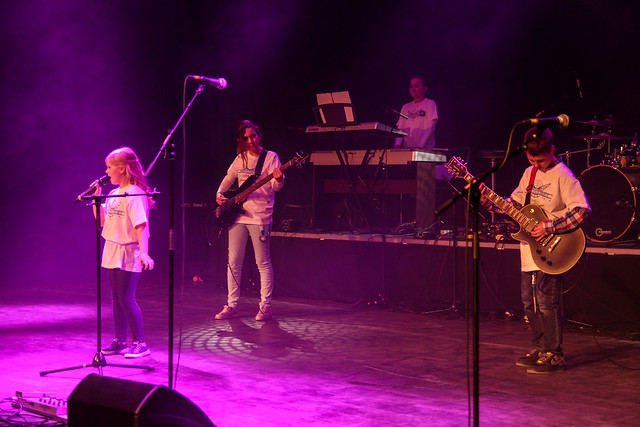 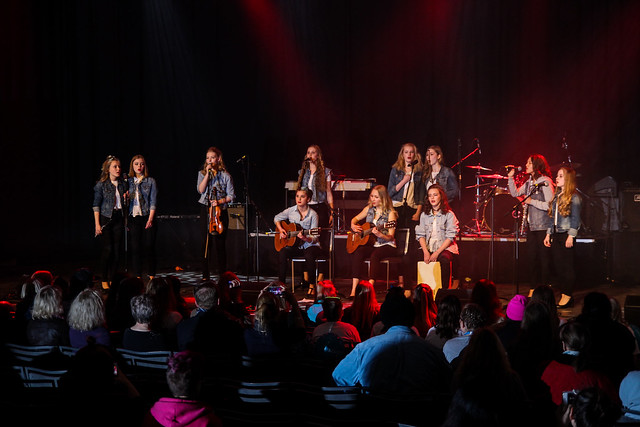 Other performances from Friday evening. 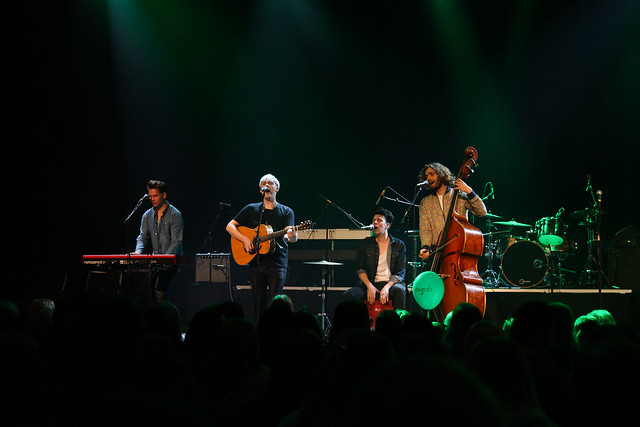 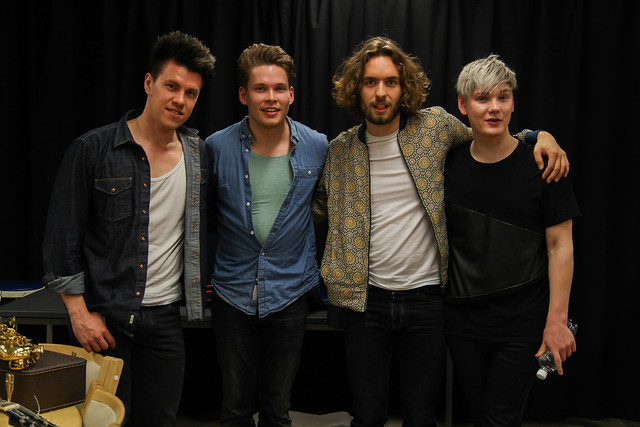 Satin Circus posed for a picture before running off to their screaming fans in the lobby. 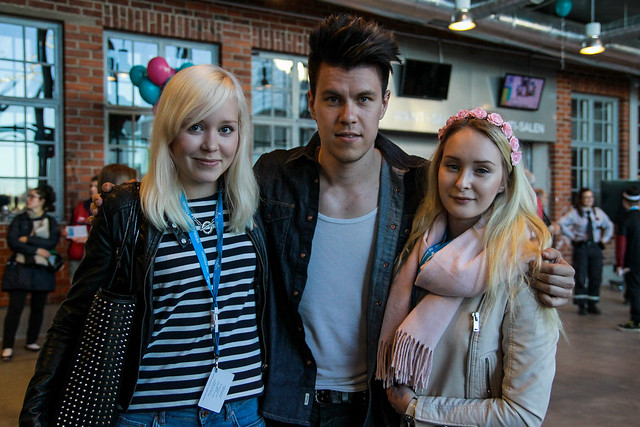 Beautiful Lotta & Elina visited, and had to get a picture with Satin Circus’ Olli Halonen.

I’m sorry for the lack of update. I feel the most like updating when a lot of things are happening, but those are the days when I stumble in through the door after midnight and fall straight asleep on top of my bed.

Last weekend was amazing. The national youth music festival SOUNDS came to my tiny little hometown Porvoo, and I was involved through a course in event production. Every third year, Young Culture (foundation under the Ministry of Culture and Education) arranges a music event, every third theatre and every third a dance event. These are called Sounds, Teatris and Moves, and variants of them have been arranged nationwide since the 50’s.

It all starts with the regionals, where a professional jury picks out a few teams that will represent the region in the nationals. This years regionals in Östnyland (Porvoo, Sipoo, Loviisa) were in March in Loviisa, and I was hosting. The nationals were for the first time ever in a small, bilingual city and arranged by all three above mentioned. The focuspoint was biligualism (Swedish and Finnish) So I served as the Swedish-speaking host on the main stage Avanti in Art Factory, the biggest of the four stages we used.

I had a total blast, the hosting went great and on Saturday I got to co-operate with a famous TV-host from The Voice of Finland, which was super awesome. Tea Khalifa gave me lots of advice and we made a great team, switching between languages and reminding each other of what to say. I met like 30 of the total 95 bands backstage and got to talk to them about what they’re doing, plus listen to, enjoy and photograph their performances. On a side note, I took 3000 pictures between Friday and Sunday, and I went through all of them after midnight when I got home.

A small jump in the history. Spring 2014, I’m writing the agenda for a youth council meeting. Tupa from the youth services gives me a not saying “Bileet 2015” (Party 2015) and ask me to write that down. She explains that a huge music event will come to Porvoo and we could be planning the evening party for the 1000-2000 artists if we wanted to. A year later, late March 2015, SOUNDS is coming up and we’ve done nothing but shown our interest. So former youth counselor Thai Quach comes in (he’s officially Porvoo’s most useful contact, he knows EVERYONE) and starts doing things about the ideas we had. A month and a half later, Saturday evening 16.5, 10 young people are putting up a tent, a stage, 14 white meag balloons, a projector, some fireworks, cotton candy- and slushie-machines and lots of other things on the market place with like 50 others.

We gave everyhting out for free. The evening started with succesful Open Stage, free cotton candy, slushies and good feeling for everybody. I was in charge of watching the balloons (it’s weird what people would  do to get a huge white balloon) and so I had time to mingle with Sounds-people and curious Porvoo-people. It was absolutely amazing. Then Kasmir and Axl Smith joined the young artists on stage and a total party broke out on the street and in the market place. We made Cotton Candy until we were out of sugar. I stayed and watched the tent while trying to update web pages etc. After the concert(s), a really cool 3D-video mapping against the city hall took place, and this was done with some cool technology that hasn’t been used here before. The audience went crazy when the fireworks started, around 10 000 people had gathered there at some point. We had some true professionals plan and perform the fireworks, and it was unbelievable. A show none of us will forget in a long time. A magical night, so to say.

The weekend ended with a really good closing show, where some of the acts performed, got scholarships and diplomas, and then I headed to a meeting in Helsinki with the FSS international committee. I got picked out to represent us in Brussels in June, on the General Assembly of OBESSU. Another full and fun week coming up!